Apparently my wife and I have kept every instruction manual for every piece of electronics we’ve ever owned. And today we were tossing some of them out. 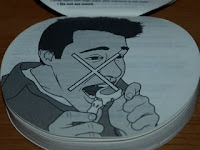 I came across the manual for a watch/ compass/ altimeter/ swiss-army knife/ & parachute I own. I’ve never even opened the manual before, as I figured how to set it myself. (it’s a watch for god-sakes… not a nuclear reactor) But there was a picture in the manual which caught my eye.

So I looked closer and saw the caption which goes with it. Just about the last four words I ever expected to see.

So I look closer, and in every language of the manual is the same picture, and the same instruction.

This means a few very scary things happened at the watch company:

1 – The Lawyers came by.
2 – Probably the accountants too.

But scariest of all – is nothing about this multi-featured watch, or it’s manual, is the least bit appetizing or seems like something to pull someone from the brink of starvation.

Yet there it is.

Which means someone has done it. Some idiot decided to eat his watch.

It’s so stupid, in fact, I can’t begin to put together the thought process that ends with. “Oh… wait, this bundle of plastic and circuits on my wrist… dinner!”

And… when they got horribly sick, somebody sued. Probably won too, because there was nothing in the manual that clearly stated “Do not mistake your watch for a powerbar you incomprehendible imbecile.”

So there it is. Thank god. To keep us all from doing something stupid:

Phew… that was a close one.